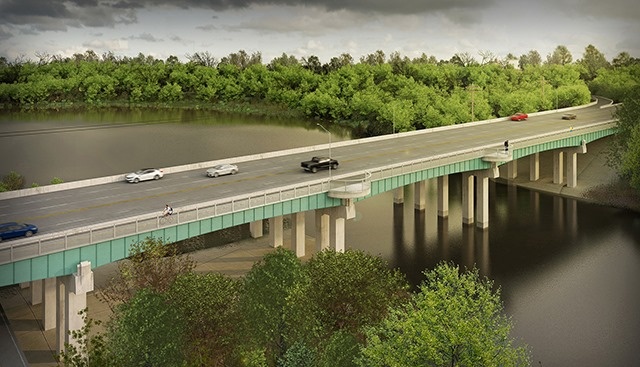 It’s a small -- but important  -- bridge, one poised to have a major impact on local trails and area cyclists.

The Little Miami Scenic Trail – locally known as the Loveland Bike Trail -- is perhaps among the best known trails in our area. It knits together various communities along the Little Miami River, from Newtown, Terrace Park and Milford, upwards to Loveland, Morrow and Yellow Springs. Up until now, there has been no bike-friendly way to cross the Little Miami River in Anderson Township to reach adjacent Cincinnati trails.

That’s all about to change. A dedicated pedestrian and cycling bridge connecting the Little Miami Scenic Trail to Armleder Park and downtown Cincinnati via the Lunken Bike Path and the Ohio River Trail, is scheduled to be completed by next year. Once built, the bridge would cross the river near Lunken Airport, giving bicyclists a dedicated path from Downtown Cincinnati to the nearly 80-mile Little Miami Scenic Trail.

“Construction is expected to start next month – but you may see utility companies out there now getting things ready. The anticipated completion and trail opening is summer 2022,” said Becky Osinski, Regional Planning Coordinator for Great Parks of Hamilton County.

With the construction of this final link, cyclists and pedestrians will have a dedicated lane on the Beechmont Bridge spanning the Little Miami Scenic River. The improvement means cyclists could someday ride on the Little Miami Trail from the Ohio River all the way to Lake Erie in northern Ohio via the Ohio to Erie Trail, including the 78-mile portion of the trail in southwestern Ohio.

The south side of the 500-foot long Beechmont Bridge will be widened to provide a 14-foot wide hike/bike lane separated from traffic by a concrete barrier with a metal railing, according to Tim Zelek, Great Parks of Hamilton County Chief of Planning. A joint undertaking between Great Parks of Hamilton County and the city of Cincinnati, the project also includes a retaining wall underneath the bridge for pedestrian passageway and a tunnel under the westbound Ohio 32 ramp to Beechmont Avenue. In 2016, Great Parks extended the Little Miami Scenic Trail by 3.15 miles to where it currently ends, at Beechmont Avenue and State Route 32.

“We’re really excited to see this project realized,” noted Anderson Township Planner Brad Bowers. “Connecting this segment of the Little Miami Trail to the city of Cincinnati and the rest of the regional trails network has been a long-standing goal of ours.”

The project is funded by a $4.3 million federal Congestion Mitigation and Air Quality Grant (CMAQ), about 80 percent of the project’s total estimated $5.4 million price tag. Great Parks of Hamilton County is securing the remainder of the costs not covered by the federal grant, about $2 million in all, Osinski said. Those funds are being raised through a combination of capital budget funds, State of Ohio capital improvement funds and other planned grant funding requests.

Along with real estate, cycling is my other passion. If purchasing a home with access to any of our area Trail(s) let me help you! Or if you just want to go for a bike ride! Call me at 513-702-3419 or email angie.sexton@cbws.com